In Melanie’s own words

I am blessed to have been born into interesting and diverse cultures: my father comes from the oldest city in Austria, Enns (Upper Austria) and my mother is from the oldest cultures in the world, Aboriginal people of Australia. While celebrating my Austrian heritage, I also identify through my Mum’s line as a Mamu Aboriginal woman, Dugul-barra and Wari-barra family groups, from the Johnstone River catchment of the Wet Tropics of Far North Queensland and the adjoining Great Barrier Reef sea country. Reef and rainforest country are important sources for my inspirations.

I have known from a very young age that I was going to be an artist. While also being a bookworm and a piano player, art was a world that I frequently retreated into as I grew up. I reckon this is because I was deaf and felt I couldn’t join in with groups of people. As a teen and along with my sister Joelene, we created art on didgeridoos and canvas. This art sold very quickly in the little opal mining outback town of Yowah way out back of western Queensland. This red soil country still influences my works.

When I was in my late teens/early twenties, I started playing around with the ideas of combining my Aboriginal and Austrian inspirations. I had already tried my style in Aboriginal, Folk and Abstract arts and I had had a successful first exhibition at Outback at Isa Gallery (and right now coming up to a 10 year anniversary exhibition with them). So at 23 I travelled to Austria to live with my father’s family and absorb as much as I could of the Folk and European culture. More than anything I loved the architecture, inside and out. The patterns, gold leaf and occasional Swarovski crystal in my works are some things that since then inspire my work!

In 2007 and 2009 I had children: the first a beautiful girl born with Spina Bifida and the other a very energetic boy. I found myself out of the rat race of paid work and a lot of extra time on my hands (post daughter and pre son that is!). So I indulged myself with painting every moment that I could.

I’ve since joined up with more galleries, had several exhibitions both solo and group, painting in Mount Isa, Toowoomba and Yowah before settling down in beautiful and inspiring Far North Queensland’s Cairns city – close at hand to my mother’s country and generations past and present. I’m feeling close with the spirit of rainforest and reef animals and this is coming out in my work. Also, I’m expanding my past focus by exploring family, culture and country stories and looking forward to where this leads.

Story of the Artwork

My favourite bird to paint are the graceful and elegant Brolgas. My most vivid memory of them is on the road between the outback towns of Jundah and Longreach. There is a long stretch of country there where it is just flat plains. If you go there after the rains, the grass is a beautiful shade of sap green. There you find many of the brolgas there feeding and dancing. It is just an amazing sight. In Yowah where I spent most of my teens, we would see them amongst the Gidgee and Mulga trees, similar to what I have painted here

My favourite bird to paint are the graceful and elegant Brolgas. My most vivid memory of them is on the road between the outback towns of Jundah and Longreach. There is a long stretch of country there where it is just flat plains. If you go there after the rains, the grass is a beautiful shade of sap green. There you find many of the brolgas there feeding and dancing. It is just an amazing sight. In Yowah where I spent most of my teens, we would see them amongst the Gidgee and Mulga trees, similar to what I have painted here 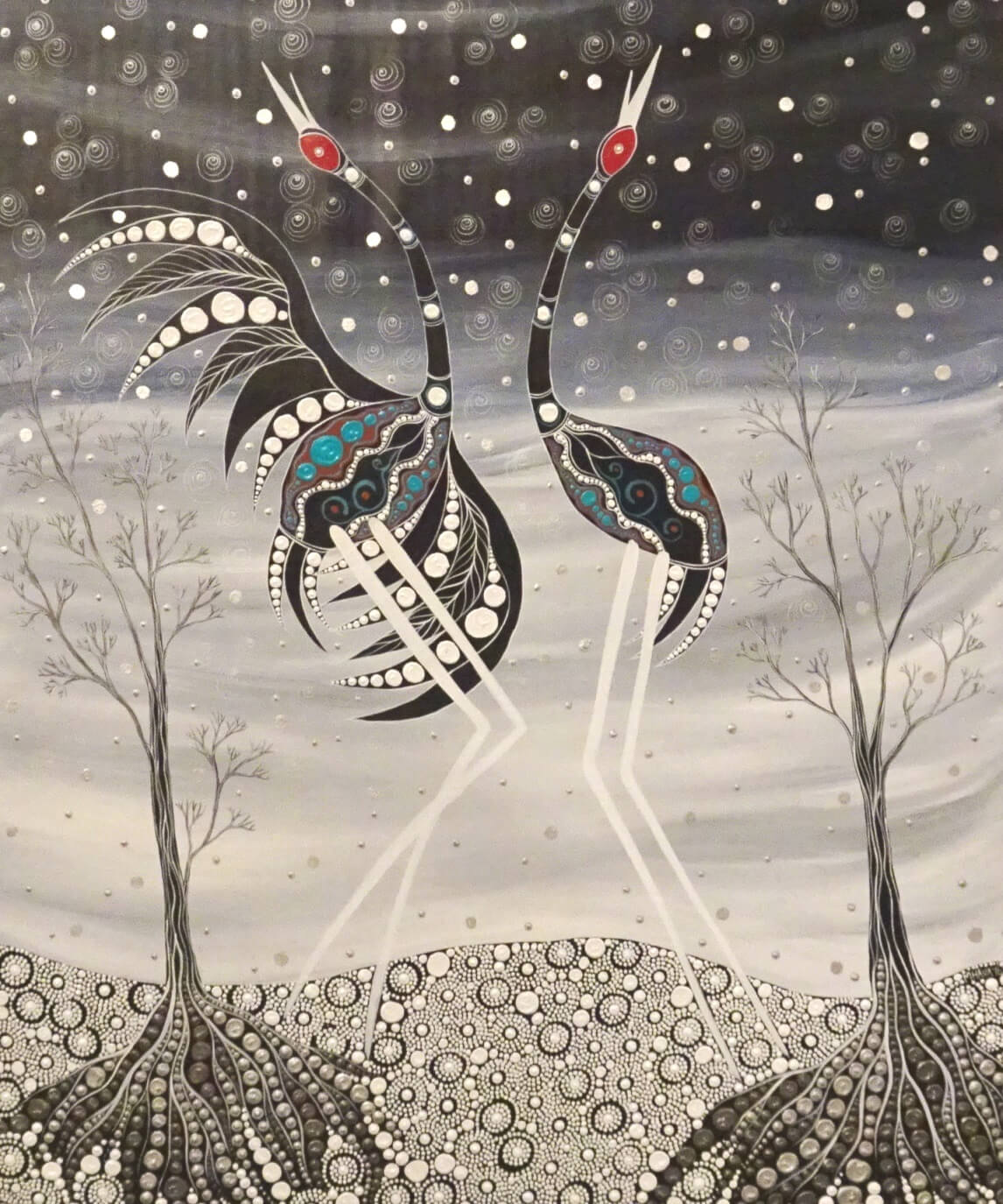