Lucky has featured in many group exhibitions since beginning her artistic career in 1977. The oldest daughter of fellow Utopian artist Mary Morton Kemarre, Lucky participated in batik workshops that were held in Utopia from 1977 to 1987 with her mother and younger siblings. Her work is represented in the Holmes a Court Collection which was exhibited extensively within Australia and abroad.
Like most other batik artists living in Utopia, Lucky made the transition to painting in the summer of 1988-9 as part of CAAMA’s “The First works on Canvas, a Summer Project”. With a more adaptable and effortless medium, Lucky continued to paint with acrylics and has travelled both to Sydney and Melbourne for exhibitions featuring her work. Lucky has also worked briefly with wood sculpture.
When Lucky was growing up she attended a bush school near Hatcher’s Creek which is North East of Utopia and spent her childhood years growing up around Kurrajong Camp in Utopia and MacDonnell Downs Station. For many years, Lucky has attended Bachelor College in Alice Springs which has seen her travel to Darwin and Tenant Creek for further education.
Lucky paints an extraordinary variety of stories which she says comes from two Countries. These countries are Ngkwarlerlanem and Arnkawenyerr of which she belongs to.
Selected Group Exhibitions
1989
• Utopia Women’s Paintings. The First Works on Canvas. A Summer Project, 1988-89, SH Ervin Gallery, Sydney
1989 – 1991
• Utopia – A Picture Story, Tandanya National Aboriginal Cultural Institute, Adelaide; The Royal Hibernian Academy, Dublin; Limerick City Gallery of Art, Limerick
1990
• Balance 1990: Views, Visions, Influences, Queensland Art Gallery, Brisbane
1991
• 8th National Aboriginal Art Award Exhibition, Museum & Art Gallery of the Northern Territory, Darwin
• Australian Perspective, Art Gallery of New South Wales, Sydney
1998
• Painting from Utopia and Balgo Hills, Aboriginal Art Galerie Bähr, Speyer, Germany
1999
• International Tour, Art Direct Gallery.com, Litsey & Kearney
2005
• Artists of Utopia: Then and Now, Outback Alive, Canberra
2006
• Desert Hues, The Gallery, Canberra
Selected Collections
• National Gallery of Australia, Canberra
•  Powerhouse Museum, Sydney
•  Queensland Art Gallery, Brisbane
•  Holmes à Court Collection, Perth 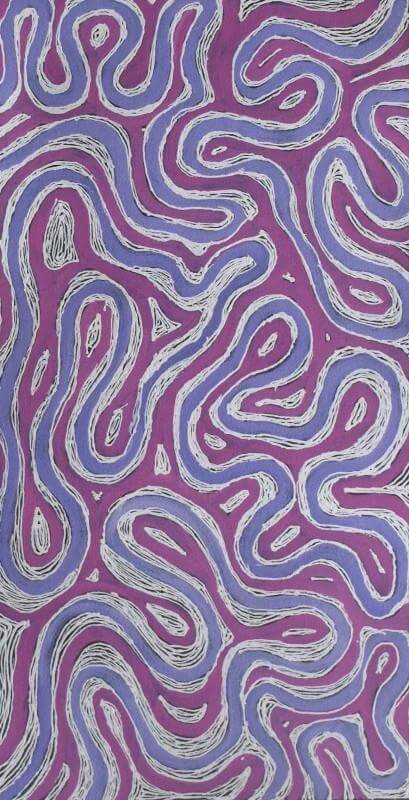