Judy Watson was born in c.1925 at Yarungkanji, Mt. Doreen Station, at the time when many Warlpiri and other Central and Western Desert Peoples were living a traditional nomadic life.

With her family Judy made many trips on foot back to and lived for long periods at Mina Mina and Yingipurlangu, her ancestral country on the border of the Tanami and Gibson Deserts. These places are rich in bush tucker such as wanakiji (bush plums), yakajirri (bush tomatoes) and wardapi (sand goanna). Judy still frequently goes hunting in the country west of Yuendumu, near her homelands.

Judy was taught painting by her elder sister, Maggie Napangardi Watson. She painted alongside her at Warlukurlangu artists for a number of years, developing her own unique style. Though a very tiny woman, Judy has had ten children, two of whom she has outlived. She is a woman of incredible energy, this is transmitted to her work through her dynamic use of colour and the energetic “dragged dotting” style and she has developed a popular and distinctive style of contrasting lines of colour with richly textured surfaces.

Judy is at the forefront of a move towards more abstract rendering of Jukurrpa (Dreamings) by Warlpiri artists, however her work retains strong kurruwarri, the details which tell of the sacredness of place and song in her culture. Judy’s Dreamings are Ngarlyipi (Snake Vine), Karnta (Woman), Mina Mina, and Kanakurlangu.

In 2007 she was selected as one of the 50 most collectable artists by Australian Art Collector.

The Story of the Artwork

The painting is describing Mina Mina which is located far to the west of Yuendumu. It is very significant to Napangardi and Napanangka women. They are the custodians of the Jukurrpa that created the area. The Jukurrpa story tells of the expedition of a group of women who travelled to the east gathering food, collecting Ngalyipi (snake vine) and performing ceremonies as they travelled.

The women began their journey at Mina Mina where Karla-ngu (digging sticks) emerged from the ground. They took these implements and travelled east creating Janyinki and other sites. Eventually their journey took them beyond Warlpiri country. The central motif in this painting is the Ngalyipi vine, which grows up the trunks and limbs of the Kurrkara (Desert Oak, ) trees. Ngalyipi is a vine sacred to Napangardi and Napanangka women and has many uses, including as a ceremonial wrap, as a strap to carry Parrajas (wooden bowls) laden with bush tucker and as a tourniquet for headaches. 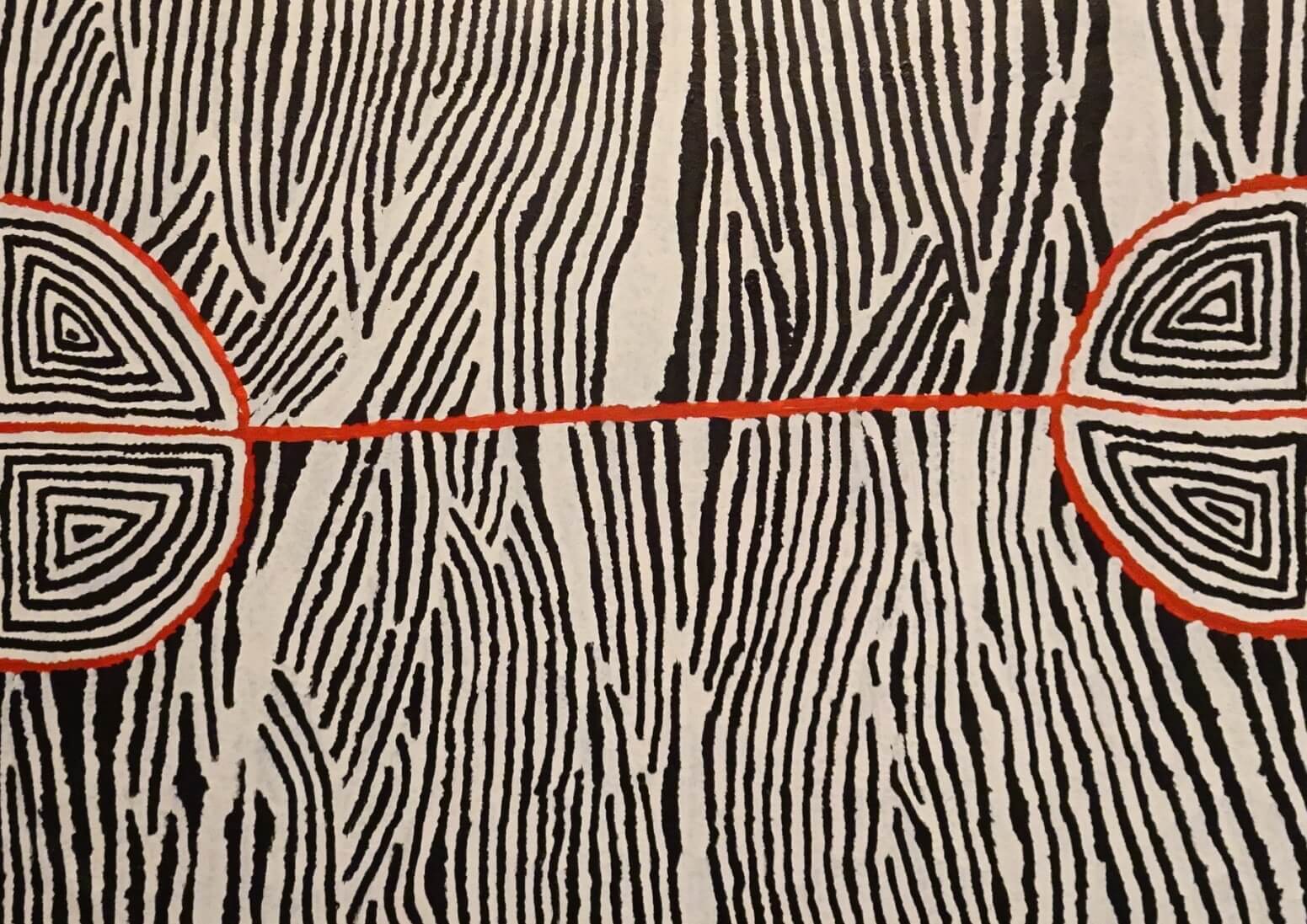